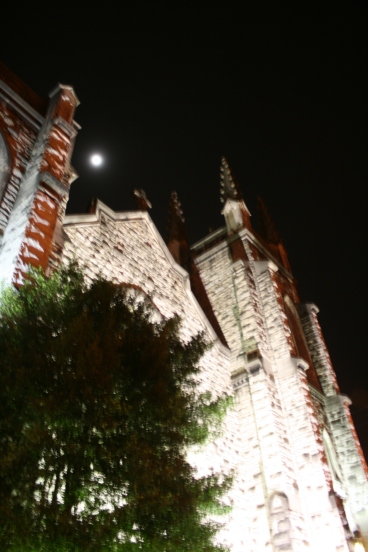 “Bless the homeless, this day and everyday,
keep them from physical and emotional harm,
fill their hearts with hope for the future and for today,
comfort the homeless as they walk their difficult paths.
May I know that anyone, even me,can be homeless.”

These are the people who died homeless in 2015 in Knoxville, Tennessee.

An annual memorial service to remember the individuals known by name as well as those nameless was held at St. John’s Lutheran Church last Thursday evening.

You might think if you are homeless you have no friends, but that isn’t so. Many of those without homes help each other out on the street. They also become involved with social workers  and church goers, getting to know them one-on-one.

This service is always moving, mostly because of the people who speak. They may be involved with ministries to help the homeless or previously homeless themselves.

Darrell Murrell’s message of hope was meaningful and poignant. He stressed that he was saved from a life on the streets because people in this church “kept loving” on him until he felt God working through them.

“May hope touch each homeless heart, spirit and life,
let the kindness of others bring lasting benefits, bring freedom from addiction,  illness and misery,  open their humanity to include & embrace themselves.”

It happens often in downtown Knoxville, being approached by a shabbily dressed man with uncombed hair and beard, “Have you got some change? I’m hungry.” or “I need two dollars for some Tylenol.”

I’ll admit I feel irritated at the request, but start digging around to see if I have any change.  Along with being irritated, conflicting feelings arise: We are taught to be kind and to treat others as we want to be treated; we are also taught to stand on our own two feet so why is someone asking me for money? To top it off I get a guilty feeling (Southern women feel guilty about everything.) because I live a better material life than this person.

The last time I was approached on Market Square Mall. I did give the man a dollar.

He then started down the row of benches looking for more givers until the policemen on bikes talked to him and he left.

I wandered down to where Michael Davis, the Vendor Coordinator for The Amplifier, Knoxville’s street paper, had set up for the day. The vendors for this excellent publication are former homeless individuals.

I asked Michael if I should have given the man money. His answer was an immediate “NO” with a vigorous shake of his head.  “I saw you give that guy money. He didn’t want Tylenol; he wanted alcohol. He was selling Amplifiers yesterday, but I fired him after I saw him try to steal a tip from one of the outdoor restaurant tables.”

But how do I know it won’t go for food?  What about the person standing at the interstate exit with a sign asking for help? The woman in the grocery store parking lot wanting money to buy diapers? Or the young kids with their backpacks who need money to get back home?

Again the emphatic shake of his head, “All they want is alcohol or drugs. Most of them know exactly where they can get food or shelter in Knoxville.”

What will I do from now on for the person asking for a handout?

I need to fit my action to what I believe I should do and leave the panhandler to do the same.

Bitter cold. Snow. Ice. That covers the weather for Knoxville in February. It inconvenienced many of us by temporarily interrupting power or making roads too treacherous to travel. It posed deadly harm in the form of single digit temperatures to the homeless.

Weather Cultivates Concern
One person posted on Facebook her concerns for a person staying under a bridge near her home. She took blankets to the individual, but as it became colder, she feared the person might freeze to death during the night. She says that she called the police department and they said they would go by later to see if the person needed help. Not satisfied she called 911 and an ambulance did come and pick up the person.

I saw a post by the Common Cause Thrift Shop asking for donations of coats, blankets, hand warmers which they distributed during this emergency. Two churches opened their doors to provide shelter: Park West Church of God as a Red Cross Shelter, and Redeemer Church of Knoxville because people came seeking shelter. These incidents made me wonder what is the best way to help during a time of extreme need.

Where to Look for Help
Knoxville has a number of non-profit organizations–Salvation Army. Knoxville Area Rescue Ministries (KARM), Volunteer Ministry Center(VMC)–dedicated to helping people every day of the year. I contacted Rev. Bruce W. Spangler, COO of Volunteer Ministry Center and asked him what happened during a weather crisis: Are rules regarding admission to a shelter relaxed at all? Is there a means of checking on those who usually don’t want to come to a shelter to see if they would now? Does anyone have the authority to make a person, i.e., police, to stay in shelter?

Rev. Spangler replied, “As to your questions, shelter requirements are loosened during the bitter cold. I don’t know about the ‘making someone’ stay in a shelter. I would say that authorities can strongly encourage but I doubt that anyone can make someone go into a shelter (it becomes one of civil rights).”

I spoke to Eddie Young, President of Redeeming Hope Ministries, and Executive Director of “The Amplifier,” who registered dismay over the lack of across-the-board acceptance of people needing shelter during extreme weather. “Although Redeemer Church was not set up to operate as a shelter, we did the best we could to care for some turned away at KARM.”

Communication During A Crisis
How do the people on the street know where to look for help during extreme weather? Young says word of mouth is simple and fast and workers or volunteers for a shelter also alert people and offer transportation. If you are a person worried about the safety of someone during such a crisis, 911 is the number to call.

After The Crisis
So the fiercest of the weather has passed and life returns to normal. I wondered if we had lost anyone due to freezing to death outside and called the City of Knoxville Police Department, Records & Accidents. Transferred to the Crime Analysis Unit, the message I received was that they don’t keep stats on deaths due to cold, but did not recall any in the month of February. Eddie Young knows of one man who died out-of-doors during the cold, but says it is difficult to say death was the direct result of exposure without an autopsy.

What is easy to note is how the concern dissipates after an emergency. This doesn’t go unnoticed by the homeless or by the professionals who work with them on a daily basis. Why this gap?

Spangler says, “Often times the bitter cold or extreme heat will bring about a desire to help. Emergency situations do require emergency responses. However, that mode of operating only concentrates on the problem and permanent solutions are ignored.

Our community, for the most part, perceives homelessness as something that good people do to help the less fortunate. Since the good people respond, civic leadership and elected officials need not worry about it. Therefore it is not a community problem, just a bad experience that someone else has.

Permanent solutions that consist of accessible and appropriate housing plus services are proven effective and cost efficient. However, it takes a public policy perspective to make that happen.It takes community support and political will.  At this time, the two are not on the same page. Until this happens, we will continue to struggle how to respond in momentarily incidents of inclement weather and ignore the issue the rest of time.”

Knoxville has many caring citizens who work through religious and other helping organizations to provide good “band-aids” for the homeless. It is time to push back this first responder, emergency mode of operation. Consistent, unified effort is the solution to lead the nearly 800 people of Knoxville’s streets to a home.

To learn more about homelessness in Knoxville, go to the internet and search https://sites.google.com/site/kkchcoalition/.