One spring day a friend, Karen and I were in Cades Cove taking in the visual glory  always found there. She proposed we take Parsons Branch Road as a different way out. Located just beyond the gift shop and grist mill, Parsons Branch is a one way, narrow, winding, eight miles long road.

I don’t write poetry, but the memory of this rough beautiful ride came out in poetic style.

A one way passage
over the gap,
connects Cades Coves
to the mighty Dragon.

a four-wheel drive buck;
quiet enough to satisfy
the longing for solitude.

Treasures hidden
by thick undergrowth,
concealed, except for the fluttering wing
of a ruffed grouse, 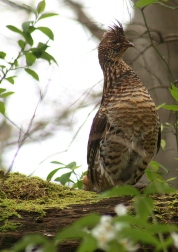 The rapid movement
of a black racer
disappearing over a log.

My last post explains how I found myself, on a very cold day, marching up the steps of the state Capitol building chanting, “My body, my choice.”

On the bus ride I asked some of the people around me why they were making the trip.

Across the aisle was a mother and daughter. On the left is Linda Anderson who read Betty Friedan’s The Female Mystique when she was 16 and said it shaped her philosophy of how to live her life.  A member of NO

W since the 80s she says, “I have always believed in birth control and contraceptive rights.  Daughter, Jane Williams,  said there are a lot of strong women in her family who set an example for her to  follow. She was going to Nashville because, “It is my body, not the government’s.”

to being around politics all the time, he grew up in an activist home. His mother started the first chapter of NOW in the area. She died recently and he decided to join the march in her honor.

Peggy Johnson Cox, left in photo below, returned to Knoxville recently after living in FL and TX for years. She came because she wants her daughter and her granddaughters to have new challenges, not fight the same injustices she has fought. She is Pro Women, Pro Family, Pro Choice, and has worked for Planned Parenthood many years. She said, “I am 67 years old and truly can’t believe we are having to fight for our rights again.” 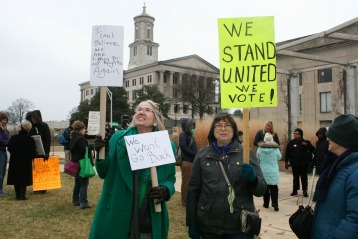 Betsy Speed, right, heard Gloria Johnson speak at her Democratic Women’s Club and felt she needed to become active in politics. Speed was quoted in The Tennessean after the march: Betsy Speed carried a sign that said “We stand united. We vote.” The 64-year-old Oak Ridge resident said she came to Nashville to secure rights for her young granddaughters in the future. “We also stood up for our rights 40 years ago,” Speed said. “Why do we have to do it again? It’s hard to understand. But I have young granddaughters, and I’m here for them.”

Anna Weatherstone, 27, was one of the younger people participating. I had the pleasure of sitting with her on the bus and sharing the day with her.  I asked Anna why she came. “I am about

to obtain my master’s degree. I have started a career I love. I own my home. I live my life exactly the way I want and none of that would be possible had I not been able to access the women’s health services offered by Planned Parenthood. That care needs to be available to all women. My mother and father taught me to stand up for what is right. Advocating for the basic human rights of ALL people is what is right.”

Abortion, before and after Roe vs. Wade

Several women I spoke to had abortions in the 60s. One said when she became pregnant in 1969, she knew it was not the time for her to bear a child.  She crossed the border into Mexico to obtain an abortion. Her uncle was a doctor and was able to make contacts so she could do this, but she could tell no one because it was illegal in the United States at that time. “I had the resources to do it a safe way. I knew women who were not as fortunate, who had it performed in a garage, the coat hanger method. Some ended up sterile or scarred for life.”

Four years later Roe vs. Wade made legal a woman’s right to choose and the experience became very different for many. “I was getting a divorce and already had a young daughter. No job. When I went to my doctor and he confirmed I was pregnant, he then asked if I wanted to carry to term or terminate. I said terminate and the procedure took place in the hospital.”

Other Issues Important to Women of Tennessee

Along with supporting reproductive freedom, these marchers carried signs for equal pay for equal work, paid maternity leave, keeping politicians out of their medical decisions, and healthcare for all.

It is dark, cold and early Tuesday morning when I wake up before my alarm goes off. I am getting ready to board a bus with 48 other people, mostly unknowns, to travel to the Women’s March on Nashville. This march, a grassroots effort started in Knoxville,

developed to remind legislators that participants would be watching their actions this year. Of major interest are women’s reproductive rights, equal pay for equal work, and paid maternity leave.

Why am I doing this? Because a friend asked me. Because I like doing different things. Because it could be something to write about for my blog or KnoxZine. To look deeper into myself. Most of my friends do not have a problem supporting equal pay and maternity leave, but reproduction rights, specifically abortion, is a dividing line.

Do I believe in abortion? I  believe that every woman should have the right to decide what is best for her body and her life, the right to make the choice herself. Would I have an abortion? I have no answer for that question because I have never been faced with making that decision. No matter my beliefs it comes down to what I would do in real life.

I’ll be posting some of the comments from my fellow passengers and more pictures later. 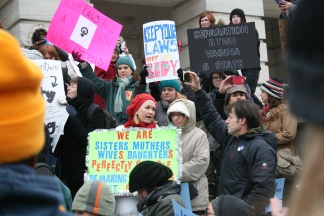